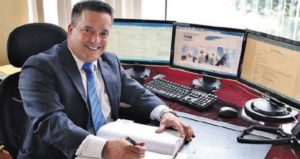 MARIO ASARO: Transaction activity is suffering from lack of availability.

How low can it go?

That’s the question brokers are asking about the still-shrinking vacancy rate for Long Island industrial space, which
plunged to a decade-low 3.4 percent in the second quarter, according to a report from Newmark Grubb Knight
Frank.
By comparison, the overall industrial vacancy rate is down from 3.6 percent in the first quarter of the year and is
substantially lower than the 4.6 percent vacancy rate recorded in Q2 2015.
And while the numbers reflect a healthy market for owners of industrial properties, the lack of available product is
limiting the number of sales and leasing deals for brokers here.
Industrial leasing activity in Nassau and Suffolk counties in the second quarter slumped to 453,346 square feet, a
38.6 percent drop from the first quarter and way below the five-year quarterly average of 1.3 million square feet,
according to a report from Colliers International LI.
“You would see more activity and transactions if there was more availability,” said broker Mario Asaro, principal of
Industry One Realty in Melville. “Many buyers are in a holding pattern or looking elsewhere, like in New Jersey.”
Veteran broker Jeffrey Schwartzberg, principal of Premier Commercial Real Estate in Woodbury, said the name of
the game in the current industrial market is lack of product.
“There’s still demand from Brooklyn and Queens, but there are very few buildings for sale,” Schwartzberg said. “It’s
an owner’s market. It’s not a buyer’s or tenant’s market.”
As a result of the strong demand and anemic supply, prices for industrial properties are firming up. Data Path, a
million, a profit from the $1.83 million the company paid for the property at the height of the market in 2007.

“This was the only building in the Hauppauge Industrial Park of this size range that was available,” said Dan Gazzola
of Newmark Grubb Knight Frank, who brokered the sale. “If there were a number of other buildings available the
seller might not have gotten this price.”
The vacancy rate for industrial properties owned by Rechler Equity Partners, Long Island’s largest industrial landlord
with about 6 million square feet, is at an all-time low of 0.9 percent.
“Over the course of the last three years we’ve seen a continued acceleration of demand among our tenants and
there’s been tremendous growth,” said Mitchell Rechler, a company principal. “We’re seeing industrial buildings
selling for prices that are hitting numbers per-square-foot that are higher than office buildings, which is pretty
astounding.”
In the second quarter, the average asking sale price for industrial properties on Long Island was $136 per square
foot, which brokers say is an all-time high.
Alberto Fiorini, principal of Alliance Real Estate in Deer Park, says the lack of inventory is creating the tightest
industrial market in recent memory.
“We are stockpiling companies looking to buy,” Fiorini said. “It’s a long waiting list.”
While the velocity of leasing slowed in the second quarter, there were still some substantial deals. Amazon leased
the entire 161,360-square-foot building at 201 Grumman Road in Bethpage formerly occupied by Goya Foods.
Entourage Commerce, which is relocating from Queens, leased the 140,000-square-foot building at 1516 Motor
Parkway, which was also sold to new owners for $12.6 million, the largest industrial sale in the second quarter.
Meanwhile, brokers see more of the same for the second half of the year: a tight market caused by high demand
and low availability.
“Existing businesses seem to be doing well and we’re seeing a continuation of the exodus from the boroughs,”
Asaro said. “We’re the next best option.”