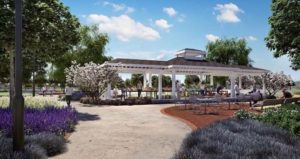 The Nassau County Legislature approved a funding mechanism Monday that allows the $1 billion Garvies Point
mixed-use development to contribute a smaller portion of payments in lieu of taxes to the county.
According to the plan, the county will receive $21.3 million from the Glen Cove project over 40 years, which comes
to about 6.4 percent of its PILOT payments, instead of the typical 7.7 percent the county would normally get.
Under the financing plan, bonds issued by the City of Glen Cove’s Industrial Development Agency will be repaid with
future incremental tax revenues generated from the project. The city is not liable for repayment of the bonds.
Garvies Point will bring 555 rental residences, 555 for-sale residences, about 75,000 square feet of retail and office
space and 22 acres of waterfront esplanades and parks to the 56-acre site along Glen Cove Creek formerly occupied
by heavy industry and junkyards.
The project is expected to generate about $400 million in net tax revenue along with an estimated annual economic
benefit of $50 million to the city, including $24 million a year in local spending by new residents and the creation of
more than 540 permanent jobs, according to a statement by development partner RXR Realty.

“The Nassau County Legislature’s vote is a major boost for the economic vibrancy of the Glen Cove community,”
Scott Rechler, RXR Realty chairman and CEO, said in the statement. “We applaud the Nassau County Legislature for
recognizing the opportunity this project represents for the Glen Cove community and for ultimately choosing to
support our effort to restore the waterfront to productive use.”
The city has already given site-plan approval for the project’s first phase, which includes six buildings of four, five
and six stories on the eastern portion of the property that will contain the rental apartments and about 25,000
square feet of retail.
But the start of the project is awaiting the outcome of court challenges by a group of local residents and the Village
of Sea Cliff, which are contesting the size and scope of the redevelopment. The suits maintain that Glen Cove is breaking a written agreement city officials signed in 2000 that limited building heights to 65 feet and the total size
of the development to 700,000 square feet.