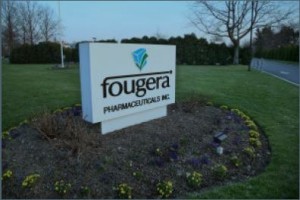 The entrance to the Fougera Pharmecuticals facility at 60 Baylis Rd. in Melville, A manufacturer of skin creams, ointments and lotions wants to combine two local factories into one large operation in Suffolk County, in a plan that will preserve nearly 400 jobs, officials said Thursday. Fougera Pharmaceuticals Inc. will make $89 million in improvements to its plant at 60 Baylis Rd. in Melville over the next few years so that work now done at 55 Cantiague Rock Rd. in Hicksville can be moved. The company on Thursday secured $3.7 million in tax breaks over 15 years from the Suffolk County Industrial Development Agency in return for promises to preserve its workforce and invest in the Melville factory. The company also will receive a $2 million grant from Empire State Development, the state’s primary business-aid agency, and intends to seek cheap electricity from the state Power Authority, officials said.

Fougera plans to add 30,000 square feet to the Baylis Road building, which is now 167,000 square feet. The company is owned by Sandoz Inc. of Germany, which specializes in generic skin medicines. Sandoz is a division of the giant Swiss drugmaker Novartis AG.

Fougera’s local plant consolidation comes as Novartis has shut down operations in Germany, India and Brazil to reduce expenses, according to a regulatory filing. In its request for tax breaks, Fougera said it had considered leaving New York State for Colorado, North Carolina or New Jersey.

“The Melville alternative has to remain profitable while simultaneously proving attractive when compared to the lower cost environment of the out-of-state option,” said Evelyn Marchany Garcia, a top Fougera executive based in Melville. The company’s Hicksville building will be sold and 128 jobs will be transferred to Melville, where 260 people now work, said George Schwab, the executive overseeing the expansion project. Records show that workers earn, on average, $88,000 a year. “We will be moving all of our production east . . . We will elevate our operation to best in class,” he said.

Fougera was purchased by Novartis in 2012 for $1.5 billion. Begun as a retail pharmacy in Brooklyn in 1849, Fougera moved to Long Island in 1963. It makes brand-name and generic medicines used to treat psoriasis, dermatitis, acne, eczema and other skin ailments. The company is part of Long Island’s drug and biotech industry, which is a bright spot in the manufacturing sector. Most of the players are in Suffolk. This is the third time the IDA has awarded tax breaks to Fougera, according to IDA executive director Anthony J. Catapano.