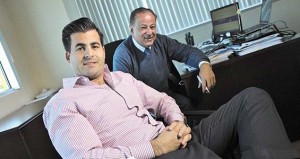 Schwartzberg and Miller also brokered an $11.4 million sale of the 120,000-square-foot industrial building at 135 Spagnoli Road in Melville that was sold by the Racanelli family to S&S Sports, an apparel distributor relocating from
Syosset. Premier represented the seller in the Melville purchase and also represented S&S in the $4.1 million sale of its 46,000-square-foot former facility at 140 Eileen Way to a Queens-based investor.

Premier’s principals, who together spent more than two decades at Colliers International in Lake Success, set out to form a smaller, leaner brokerage operation. It certainly has a low profile. The company subleases just 1,000 square
feet from an insurance firm at 135 Crossways Park Drive in Woodbury, and Premier isn’t even listed on the building’s directory.

But despite its modest digs, Premier aims to have a broad reach, even out of the area. It recently closed on the sale of a 220,000-square-foot industrial building on 17 acres in Metter, Ga. to West Babylon-based Linzer Products, a
manufacturer of painting products with distribution centers in Illinois and California.

“The market is local,” Schwartzberg said. “But some of the needs of local companies are off the Island. We can fulfill those requirements anywhere.”

Lately, Premier has been focusing on the continuing exodus of end-users who are being priced out of New York City real estate and local businesses needing more space.
“Most of the business is made up of companies coming out of the boroughs or expanding Long Island firms,” Miller said.

Premier’s intention is to make it simpler for its clients to navigate the real estate market with fewer restrictions. Normally, most commercial brokerage firms sign property owners to representation agreements that span six to 12
months. Clients who sign with Premier can cancel at any time.

“Our philosophy is simple,” Schwartzberg said. “If you like what we’re doing for you, you keep us. If not, you get rid of us.”

Regardless of its expected continued success, Premier’s principals don’t plan on increasing the company’s size, opting instead to remain small.