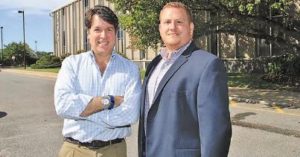 In its ongoing efforts to bring its largest office building up to full occupancy, Sterling Equities is seeking tax breaksfrom the Nassau County Industrial Development Agency.

Sterling, the owner of the 200,000squarefoot building at 999 Stewart Ave., has been investing in upgrades at the
property recently, including transforming an industrial elevator into a passenger lift. But to help with further
renovations and attract a tenant to the building’s 27,000squarefeet of vacant space, the company wants
assistance from the IDA that would freeze taxes for prospective businesses that may want to relocate there.

A public hearing on the application for “exemptions or partial exemptions from real property taxes” is set for next
week. Philip Wachtler, a principal in Farmingdale based Wachtler Knopf Equities, the building’s property manager, said IDA benefits would help attract tenants and serve to level the playing field with properties in Suffolk County, where taxes can be $3 or $4 lower per square foot.

“If it gives us any kind of leg up it’s important,” Wachtler said. “It might give us a competitive edge over Suffolk.
We’re trying to bring jobs to Nassau County.”
WKE just signed Weight Watchers, its newest tenant for the Bethpage building, which is taking 22,343 square feet.

Ownership spent nearly $1 million on building out the new space, which had been vacant for quite a while. Weight
Watchers is relocating from space it had been subleasing from Cablevision at 300 Jericho Quadrangle in Jericho and
is now being transformed into the new headquarters for Publishers Clearing House.

“They (Weight Watchers) were free agents and they could have gone anywhere,” Wachtler said. “But we put
together a great deal for them.”

Great Neckbased Sterling, whose principals also own a majority stake in the New York Mets, own eight commercial
properties on Long Island, of which 999 Stewart Ave. is the largest. The Bethpage office building sits on 15.29 acres
and has ample parking – able to accommodate 1,285 cars – which translates into more than six spots for every
1,000 square feet of office space. Wachtler said the abundance of parking is an important feature for companies
with a lot of employees. Another of its amenities is its fullservice, firstfloor cafeteria.

While large blocks of office space are in relatively low supply in Nassau, demand isn’t that strong, another reason
why Wachtler says a break on taxes and continued property improvements should help bring tenants and their
employees to the Bethpage complex.

“We’ve put a lot of money into the building and we plan to put in a lot more,” he said.

The public hearing will be held by the Nassau IDA at 10 a.m. on Sept. 7 at the Oyster Bay Community Center at 59
Church St. in Oyster Bay.